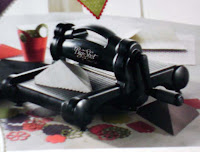 Today was an absolutely mind boggling day, well let me just be honest it's been a mind boggling week. First off we were entertained this morning by the Stampin' Up! All Star Band and let me just say those guys could rock! They were amazing!Today Shelli announced a partnership between Stampin' Up! and Sizzix! We will be carrying the Big Shot and best of all EXCLUSIVE Stampin' Up! di 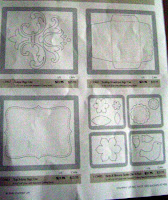 es!! Not only are they SU exclusive but some are part of Shelli's new signature collection and they are totally awesome. I really apologize for the not so great pictures but not having my light setup at home has made it really hard to take decent photos!
Here are a couple of projects Shelli showed on stage using the new signature dies. The first one is her modeling a mask she made for one of her grandson's birthday party. It takes a really great woman to model this to 7,000 demonstrators all armed with cameras!

Next is the most adorable Santa! All I can say is I can't wait for this thing to land on my doorstep so I can start playing!! 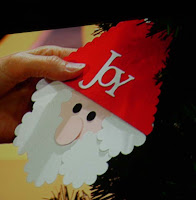 Now if all of this wasn't exciting enough, she announced that demonstrators at convention were getting a special price on the machine and several of the dies. Of course, the crowd broke out in a roar of approval!
Next, it was on to some great Stampin' Up moments including the Statement of the Heart awards and then Shelli announced that we had a special visitor. It just happened to be Ronald McDonald himself! He came to collect Stampin' Up! annual $100,000 donation along with the 4th quarter donation from the sale of the annual Ronald McDonald House set. But hold on to your hats because this year's Ronald McDonald House set is Say it with Scallops and it was designed to go with our new scalloped square punch! How cool is that??

By the way Ronald is the one with the red hair and the man with the movie star good looks is Stampin' Up! president Dale Fillmore!
Tonight I joined my good friend Joni and her upline and downline group for dinner. Since I'm on my own this year, it was great to have a fun group to hang out with. Here's me and Joni hanging out yesterday. Let me just say I don't know if I would have survived this week without Joni and her husband Jim. Joni has helped me my being my stand in on several swaps when my other swaps ran overtime and Jim has been bringing us lunch every day and driving us all over the place. 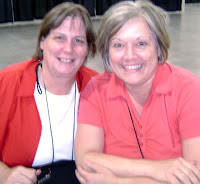 I can't believe tomorrow is the last day of convention. I'm exhausted but I've had so much fun and it's so sad to think that I probably won't see most of my SU family again until January when we meet up again for Leadership training. It has been an amazing week and I can't wait to get back, plan my new catalog order, plan my classes for the upcoming months, and share what I've learned with my super customers who are back home. I know they are anxiously awaiting the new catalog which will hopefully be arriving early next week!
Posted by Sharon Bridwell at 9:45 PM