sigh! I can't believe it's been so long since I posted. Following leadership, Ron and I spent a glorious week ALONE at Walt Disney World! I have to say it was a great trip despite the major Mommy guilt I had for part of the time I was gone. We had such a great time and once again has some Disney magic thown our way at Animal Kingdom. Have I said how much I love that park? If you didn't hear me before, I really love that park! We were once again chosen as the Safari Family of the day and got to do a private safari and given the head of the line pass for the rest of the day. We rode the safari five times that day and even got so lucky as to get to ride a second time with the guide that chose us that morning! I have wonderful pictures, I can assure you, but they are on the laptop and I haven't had a minute to move them over. That very same day we got to stand in the VIP section for the Jammin' Jungle Parade too! We also got to see Finding Nemo the Musical twice that day and were so happy when our favorite "Crush" performer was in the second show! Oh, and Ron got picked out of the audience at The Festival of the Lion King. As one of the female performers came up and said, "I bet this man thinks I'm the gift." And Ron of course said, "yes" and she asked him his name and then said, "I think that stands for this is my lucky day." Later on in the show she asked him to come up and make the sound the warthogs make---let's just say that was a hilarious moment. Add to that the VERY light crowds and the day was just AWESOME! Again, I have pictures and will try to get something posted on that entire day on Wednesday when I have a day off this week. We spent our last day visiting all four of the parks, we called it Ron & Sharon's Four Park Foray. We had such a great time bouncing around and revisiting all of our favorite attactions! However, we were exhausted by the end of the day and I don't recommend that especially to those who have small children.

Yesterday my stamp clubs came over and it was so great seeing all my ladies once again. It's been ages since we met (November to be exact) and I think everyone was glad to be back together.
Here's one of the projects that we did yesterday. I can't take credit for this cute project, the idea came from my friend and fellow demo, Stacy McCain. Thanks Stacy for the inspiration!! 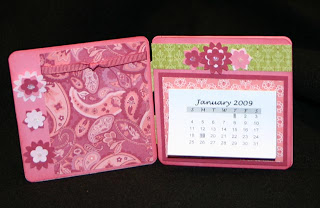 All products from Stampin' Up! except the coasters and the calendar.
Paper: Regal Rose, Rose Red, Pink Pirouette, Rasberry Tart Designer Series paper
Ink: Regal Rose
Accessories: Rose Red grosgrain, Boho Blossoms punch, Crystal Effects, Dazzling Diamonds glitter, glue stick, sponge
I have a picture picked out from our trip to put on this little calendar frame. It will look great sitting out on my desk all year!
Have a super week everyone! I promise to be better about posting this week.
Posted by Sharon Bridwell at 6:09 PM

You are not a loser...just busy! I have missed your posts, so can't wait for Wednesday. Take care.

Sounds like a blast at the Animal Park. I haven't been to Disney World since 2001 and it was still pretty new in those days. Sounds like you had a very lucky visit!

And I love your calendar too.

Sounds like you had fun at Disney! I have never been-so I am jealous. Love the calendar and the box. I haven't even used my raspberry tart paper. Looks like a cute project! Love that boho blossoms punch too!!